Knowing the common knock sensor faults is the main idea of ​​this article. For the correct operation of a car, there are several systems that work together and on-board computers that monitor the operation of various parts. When it comes to proper engine operation, several mechanisms such as fuel timing, fuel injection, and ignition timing must be coordinated to help you deliver optimal power output.

WHAT IS A KNOCK SENSOR

SIGNS OF A BAD KNOCK SENSOR

Your vehicle’s knock sensor may malfunction due to various reasons. Mainly, the sensor can be damaged as the vehicle ages and may require replacement. As time passes, wear and tear can occur on the sensor. It is also susceptible to corrosion and the functionality of the sensor can be affected.

The knock sensor is sensitive equipment that removes a lot of heat from the engine. The sensors are generally placed away from extreme heat, but this is one of the unfortunate sensors that must be in a nearby location. As such, over time this sensor can wear out and sag from constant use.

Therefore, it is advisable to know the common signs of knock sensor failure.

THE CHECK ENGINE LIGHT COMES ON

When there is a problem with the engine, the Engine Control Unit (ECU) sends an error code that shows where the problem is. The same happens when the knock sensor is damaged. The “Check Engine” light comes on your dash. The most practical way to know about the problem is to connect a code scanner to the car. If the knock sensor has problems, you will see an error code P0325 – P0332.

The Powertrain Control Module (PCM) uses data sent by the knock sensor to alter ignition timing, which can directly affect acceleration. At times, you will feel that your car is not responding to the throttle, as the knock sensor is sending incorrect information to the PCM. Not only that, but the amounts of fuel consumed will increase in your car, causing fuel economy to deteriorate.

Whenever you feel like you need to fill your gas tank more often, it’s time to visit the mechanic to check if the knock sensor is failing.

When a knock sensor is not meeting its standards, the PCM is not getting important data or receiving correct data from the sensor. This causes the PCM to incorrectly adjust the ignition timing. The engine fails and becomes prone to jump in combustion. The engine could stall or have inconsistent combustion.

The knock sensor connector is exposed to contaminants such as dust and debris in the engine compartment. In some cars, you may have multiple knock sensors. The sensor is also very close to engine heat, so it’s likely to fail sooner rather than later.

By checking for corrosion on the inside of the connector or on the sensor itself you may not need to replace the sensor. However, you can extend the life of the sensor by taking more care of it. Remember that if the sensor fails internally, this method will not help you.

The knock sensor can be found inside the engine, near the cylinders or the intake manifold which means it won’t be very easy to find. You will probably have to remove the top of the motor also called the head and proceed to find the sensor.

Once the sensor is located and uninstalled, it is cleaned. The sensor connector can be cleaned in two ways, either by using alcohol as a cleaning agent or by using a special sensor cleaner. The cleaning part is easy but requires special care. The sensor can be placed in the plastic bag and rubbed with alcohol or cleaned with the cleaner.

Place the sensor back in its location and proceed to normalize the engine. As soon as you are done with that start the engine and listen for any audible noise coming from the engine other than the noise from the engine itself.

The knock sensor can be tested for faults in two ways. You can use an error code scanner or use a voltmeter to test the efficiency of the sensor. Both ways have their own advantages and disadvantages. 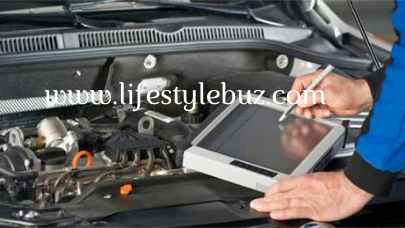 Starting with the error code scanner. It is clear that the code scanner is the easiest way to discover any knock sensor issues. All you need is a cheap and functional OBDII scanner that can read and display codes right on your screen preferably one with a pre-installed code dictionary. As soon as you place the scanner in the car. It will tell you by codes if there is a problem with the sensor.

HOW TO REPLACE THE KNOCK SENSOR

You can repair or replace your vehicle’s knock sensor yourself by following this easy-to-follow “step-by-step”. It is highly recommended to have your vehicle’s service manual on hand.

Usually when we confirm that the vehicle knock sensor has been damaged, the best way to repair it is to replace it. Here is an easy to follow method to replace the knock sensor.

Turn off the vehicle’s engine. Wait for it to cool down so you don’t work with hot surfaces.

Remove the top cover from the motor.

Locate the knock sensor in your vehicle, with the help of the service manual.

Make sure you haven’t confused the knock sensor with the temperature sensor.

Make sure you have clear access to reach the sensor.

Remove the electrical connector from the sensor.

Remove the bolts and screws holding the sensor to the block.

Make sure you don’t break the sensor while removing the screws.

Remove the old sensor once you have disassembled it.

Compare the old sensor with the new one. They must be identical.

If the sensor is in the block the best option is to access it from below with the help of a bridge. This video shows how to do it.

Ultimately, the knock sensor is vital to the proper operation of your vehicle. Although it is a small component, the sensor protects the motor from internal damage. Well known automakers like BMW and Chevrolet provide easy replacements for this one.

However, a car engine is considerably more expensive than a knock sensor . Therefore, we would recommend that any of the symptoms mentioned above should be taken seriously. Lastly, you may not be able to replace it on your own so visit your trusted technician to get it done correctly.

A Guide to Getting a Loan Against Your Car

MAP SENSOR; WHAT IS IT, LOCATION, OPERATION AND FAULTS

Difference between Public Relations and Marketing

Decorate Your Home with Christmas Window Lights This Season

TEN QUALITIES AND ABILITIES THAT LEADERS SHOULD POSSESS

What is stream east and its details and reviews?